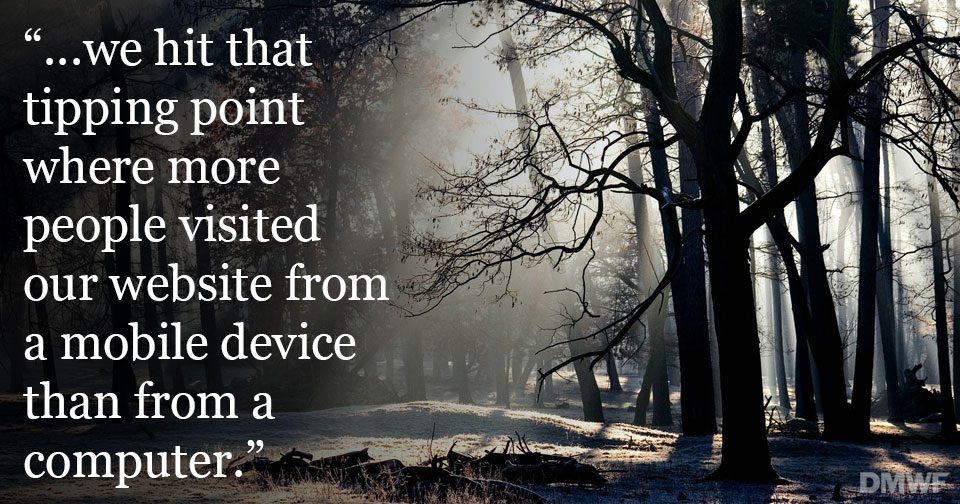 In the second part of our series on the challenges presented by mobile and social technologies to startup and legacy business; I spoke to Tom Barker, Head of Digital, The National Trust at #DMWF London to share his experience as a legacy business moving towards a mobile first focus.

In our previous installment Edward Relf, CEO of startup Laundrapp shared his experiences on the challenges Startup has faced as a mobile-first business from scratch and shared the sentiment that beyond both storytelling and mobile it’s about building trust with the customer.

The National Trust has the ‘T-word’ at its core. But the charity that preserves the nation’s legacy of houses, land, and monuments across 775 miles of coastline from the White Cliffs of Dover to the Giant’s Causeway is itself a heritage organisation, with a technology legacy dating back 15-20 years.

So how do you unleash an ambitious strategy for the future while grappling with that legacy – not to mention the deeply ingrained work practices that are supported by it?

Head of Digital Tom Barker says: “I’ve inherited lots of legacy systems: websites, databases, apps, social media accounts, and blogs. So the challenge is how to take that forward over the next five years and get the National Trust to a point where many organisations are today: a competent base level.

“But it’s not as hard as I thought it was going to be. The Trust is governed by an executive board and all of those people get the importance of digital, so really it’s been a question of giving them a logical reason of why they should do it.

“We’re a charity, we’re heavily audited internally and externally, and rightly so, which means we don’t have the luxury of trying too many things out; we have to have a good reason to do something.

“One example of this was going to the executive and saying: ‘We’ve got to change the way we work, we’ve got to change our business model’, which at the time was called ‘Go Local’, where if you were the general manager of a property you had carte blanche about how to market that via websites, social media, and so on. I said: ‘You can’t do this anymore: no new websites are to be created, and for all social media sites and blogs – if you’re going to represent the Trust in any way online – you have to sit a mandatory training module.’”

What does the mobile environment specifically bring to the table for the Trust?

“Getting a mobile presence is hugely important. We’re not unusual in that about three years ago we hit that tipping point where more people visited our website from a mobile device than from a desktop or laptop.

“We rebuilt the mobile app last year, which has a huge installed base of 1.7 million people, but the challenge was recognising that we wouldn’t be able to get everything up and running straight away.

“The previous website had 50,000 pages, which had to be audited and condensed down to a more manageable number, 9,000, and we had to train 500 people across the country to use the new CMS.

“But one thing we couldn’t do straight away was add a sign-in capability, meaning we could see how it was being used, but not who was using it. But because we were seeing a large number of drop-offs on the previous site, we thought: ‘Lets get the most basic functionality on mobile devices and then we’ll add sign-in.’ To wait would have added six to nine months to the project, and with drop-offs of about 60 per cent that’s not acceptable.”

One of the keys with a mobile-first startup such as Laundrapp is helping people to make money by simplifying marketplace access via a smart devices. How similar is the National Trust to that model, when – on the surface at least – the aim is more about helping visitors to share in a national legacy?

Says Barker: “Well, we are saying come to us and buy stuff! But one of the challenges we have as an organisation is explaining to people what it is that we do. This is where all channels need to play a new role.

“Historically, we’ve been seen as ‘stately homes in the country for middle class families to visit at the weekend’. But over the past few years there’s been a shift in strategy towards: ‘Come and be part of this: please walk on the grass, please the climb trees, here are 50 things for kids to do, come and take part.’

“That’s been great for visitor numbers, but one of the problems of that success of that people lose sight of why we exist in the first place. The heart of the matter is we’re a conservation charity. But if you position it as a charity, people say: ‘Well, you’re not a real charity, you’re not trying to find a cure for cancer’. So one of the things we’re going to do now is focus on our cause, explain to people why we do what we do and how that benefits the population.

“The website, the mobile app, the content strategy, and everything we do, are all about how people’s involvement helps to support an organisation that can then give something back. We have four and a half million members, and that’s a huge demographic, and we have to meet the highest common denominator across all of them.”

A young business telling a new story from day one, and an old organisation that has circled back to remind people of what its story was in the first place. Both are using technology to not only tell their story, but to represent their story and make it accessible to the largest number of people in the simplest, highest-quality, way.

Both are changing consumer behaviour, too: by matching their marketing strategy to business need, then supporting it with technology. That’s the correct balance.